which one to choose, laser hair removal near me or IPL at home?

Out of all the hair-removal options out there, lasers sound the most appealing… in theory. A few zaps and you’ll never have to touch a razor again? Sounds great. But then there’s the not-so-appealing part: the price tag. Usually at a derm’s office, can clock in at $150 per visit-and most people need between five to eight sessions for effective results. while laser hair removal at home, you just need to buy $50-$500 small lasers hai removal devices to zap away hair yourself with the effective result like the professional laser hair removal. So which one to choose, Laser hair removal near me or IPL Hair Removal at home?

If the thought of DIY yourself with lasers sounds scary, keep reading—we’re sharing everything you could ever want to know about this high-tech IPL Laser at-home hair-removal innovation.

IPL Laser hair removal works like this: IPL or Lasers use pulsed light to target hair, which then converts to heat and breaks down the dark pigment in the hair follicle. Zap the same pigment over and over, and it’ll damage it enough to prevent future growth. 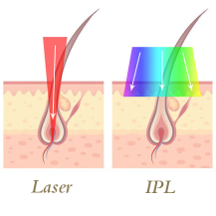 There are two types of at-home devices for hair removal. One is a true laser, and the other uses intense pulsed light. Both types remove hair, and both are less powerful than the device you’ll find at the dermatologist’s office.

That’s good and bad. On the one hand, with less power comes less responsibility. These devices are safe for amateurs to use at home, so you don’t have to worry about singeing yourself in the name of smooth skin. (Still, make sure you follow the directions exactly — because of the laser.)

But with less power also comes less effectiveness: The at-home devices don’t work as well as the pro models.
More downsides: It’s hard to cover a lot of territories — like an entire leg — with the small at-home devices. And they might not be strong enough to get completely hair-free. “Over multiple sessions, you’ll reduce the amount of hair you see — but it probably won’t be a home run.

Who Can Use It?

Because the laser needs a high contrast between your skin and your hair for it to effectively target the hair follicle, devices like the Carlany Pro and Carlany Lite work best on people with light to medium skin and dark hairs.

How Do You Use It?

It depends on the at-home IPL laser treatment, but generally it works like this: You point the device wherever you’d like to banish hair, allow it to target your hair follicle, and move to another area. Each area requires a certain number of zaps (or pulses, which sounds less intimidating). The Tria 4X comes with its own pulse counter, which helps you track the number of pulses per body part so you know when you’ve effectively treated the area.

Where Can You Use It?

Basically, anywhere you would get an in-office laser treatment—legs, arms, bikini area, underarms, upper lip, stomach, feet, hands… The list goes on. One thing to note: If you have a low pain tolerance, it might be best to stick to smaller areas like your underarms or bikini area, since the feeling of using a laser has been described as “a rubber band snapping against your skin.”

If you have the right hair and skin tones, the devices are generally safe to try. But it’s important to use them correctly.

Near your eyes (though the upper lip is OK).
Over tattoos or pigmented areas, including moles.
In the genital area (but you can safely target the bikini line).
When doing the math, consider those at-home devices might have limited battery power or contain light cartridges that will need to be replaced, Dr. Ward says. And no matter how often you use them, you might never achieve total hairlessness.

While at-home devices have been proven effective, they are best for a very narrow window of people and don’t cater for specific skin types and hair colors. Dermatologists, on the other hand, “will have sophisticated enough lasers to target all skin types,” explains Dr. Idriss. That said, if you do have light skin and dark hair, they are a great alternative if you are prepared to commit and put in the hours. As a rule of thumb, we’d say at-home lasers are worth the investment if you want to target small areas (face and armpits), as they’re easy to use accurately and quickly. Particularly true when you consider it can take as little as under 60 seconds for a derm to do your top lip, so not worth the trek down there, or the money. But for larger areas like legs and bikini line, we’d recommend seeking a professional appointment, as it requires a lot of skill to get the results you want.

Exclusive discount codes sent directly to your inbox! (we will not spam you)